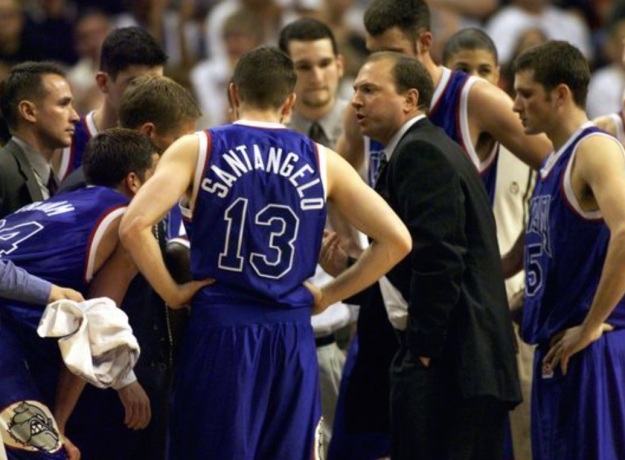 Gonzaga as a program and Mark Few as a coach were written off for years as never being able to win the big one. Then when the Bulldogs and their coach finally did reach the Final Four, they were greeted with the same ho-hum reaction that North Carolina’s getting as a No. 1 seed while everyone (quite rightly) rubs their eyes in amazement at the presence of South Carolina.

That is entirely fitting, and possibly the highest compliment to be paid to a program that was once a mid-major. No one thinks of the Zags as a mid-major program any more. When Few lands a McDonald’s All-American like Zach Collins or schedules a neutral-floor game against Arizona at the Staples Center, no one bats an eye. Well, those are not the hallmarks of a mid-major. END_OF_DOCUMENT_TOKEN_TO_BE_REPLACED 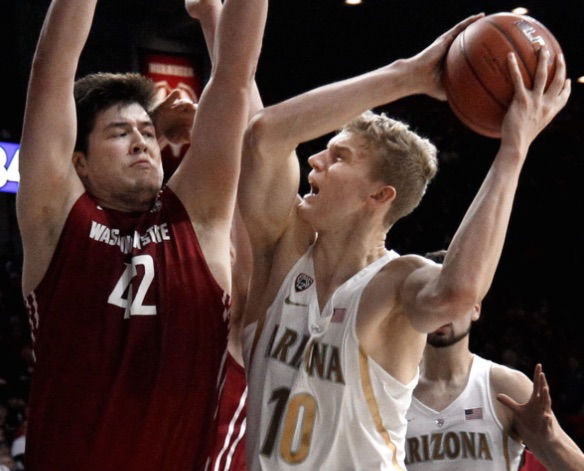 With February now upon us, I want to update the yay-scoring hallelujah I posted at ESPN.com a few weeks back. Here are the changes we’ve seen in major-conference play since 2013, in order of magnitude…

1. Scoring’s up 12.3 percent
There are exactly eight more points scored per 40 minutes of major-conference play than there were in the 2013 season. You can now expect a team to put 73.3 points on the board. (Well, not literally. On average.)

2. Three-point attempts are up by 9.4 percent
Changes Nos. 1 and 2 are correlated. (Ahem, coaches.) Note that both major-conference play and Division I basketball as a whole are more perimeter-oriented than they’ve ever been. This statement specifically includes the 2007-08 season, back when it was widely said there were “too many threes” and the three-point line was therefore moved back a foot. Now there are more threes than there were when there were too many threes. Personally I’m fine with it. END_OF_DOCUMENT_TOKEN_TO_BE_REPLACED

Not counting the 10 suits, a group like this only happens in Division I once every 1.8 years.

Now that Duke is rounding into form health-wise, this may be an appropriate moment to revisit the idea of the category 5 roster. With Mike Krzyzewski giving serious minutes to Jayson Tatum and the coach also saying that Harry Giles may play before Christmas, this epochal-roster-strength stuff is no longer a conceptual exercise where the Blue Devils are concerned. The speculative “when Duke gets healthy” dream pieces have been retired, and unalloyed present-tense adulation (heresy just two weeks ago) has begun in earnest.

A category 5 roster is one that returns at least 40 percent of its possession-minutes from the previous season, and adds a freshman class that rates out at 25 recruiting points or better based on Drew Cannon’s canonical front-loaded evaluative curve.

Duke has the nation’s only category 5 roster for 2016-17. Here’s how the Blue Devils and Kentucky fare on the metrics in question this season:

END_OF_DOCUMENT_TOKEN_TO_BE_REPLACED

We are now in week four of the college basketball season, and here are the top 13 teams from the latest AP poll:

You might be asking why I brought the curtain down on the nation’s top teams at No. 13 instead of an equally arbitrary but more customary number ending in a zero or a five.

Let me stress the word “arbitrary,” but, for now, here’s a fact worth pondering:

Every year since 2004, the eventual national champion has come from one of the top 13 teams in week four’s AP poll. END_OF_DOCUMENT_TOKEN_TO_BE_REPLACED

Duke entered 2016-17 ranked a resounding No. 1 in the nation, capturing 58 of a possible 65 first-place votes in the preseason AP poll. Alas, Mike Krzyzewski’s charges have turned out to be a rather insistently gimpy resounding No. 1.

Freshmen Harry Giles, Jayson Tatum, and Marques Bolden are all yet to appear on the floor this season. Grayson Allen’s been limping noticeably, and both Chase Jeter and Amile Jefferson have been reported as being banged up as well.

Do the math and you’re left with just three current Blue Devil starters who’ve been vouchsafed as possessing more or less normal stores of health and soundness: Matt Jones, Luke Kennard, and Frank Jackson. The descriptive modifier of choice with this team so far on the young season is “injury-ravaged.”

The modifier’s accurate, surely, yet I’ve been moved to wonder whether in this case accuracy can’t additionally be somewhat misleading. If so, it’s possible this particular brand of confusion might be able to tell us an instructive thing or two about the sport. END_OF_DOCUMENT_TOKEN_TO_BE_REPLACED

How many games will they win this season? What seed will they get in the tournament? Who among them will go pro next summer? Good questions. (Mark Zerof, USA Today)

I may be exhibiting the slightest degree of occupational bias, but it is my considered opinion that predicting future events in college basketball represents the most difficult forecasting gig there is, period. Please consider this post a tribute, then, to Ken Pomeroy, Dan Hanner, David Hess, and all of my intrepid colleagues who are engaged in this inherently hazardous line of work. It’s brutal out here.

If there’s a similarly daunting predictive challenge, I’m yet to find it. Other sports? Football introduces some interesting randomness, what with the microscopic number of games, alpha-and-omega nature of the quarterback position and win-probability-shattering pick-sixes. Yet somehow even the gridiron can’t give us anything to compare with Middle Tennessee State on March 18, 2016. (Spoken like a repentant forecaster.) At the end of the day pro sports and college football alike bequeath upon their predictors the cardinal blessing of year-to-year carryover in elite personnel. In college hoops, conversely, the best players by definition (almost) always leave. END_OF_DOCUMENT_TOKEN_TO_BE_REPLACED 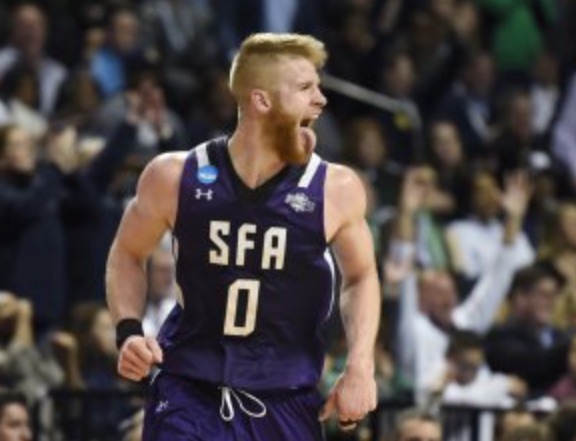 If Thomas Walkup bumps into any Villanova players, he can set them straight on which team really had the most remarkable shooting performance of 2015-16.

Watching Villanova do amazing NCAA tournament things in terms of scoring against Miami and in terms of shooting against Oklahoma made me realize I didn’t really have good information close at hand to describe just how amazing this was. I resolved to be better prepared the next time a once-in-a-generation feat takes place.

In the offseason I’ve compiled a quick and dirty record book of the best scoring and shooting performances in the seven thousand major-conference games that have been played since 2006. Last week I rolled out part one of this data, the 10 best scoring games we’ve seen in major-conference play in the last decade. One takeaway here was that if you want to see historically insane scoring, your chances are increased dramatically by attending a Big Ten game on senior day-slash-night.

Now I want to look at shooting. If you’re wondering how impressed you should have been by the 82.7 effective field goal percentage that Jay Wright’s team posted against the Sooners, the answer there is “extremely.” Out of seven thousand games (6,996, if you must know), I’ve only seen that mark bettered twice. In fact teams record an eFG north of 80 percent, on average, less than once a year.

END_OF_DOCUMENT_TOKEN_TO_BE_REPLACED

The viewership for this game was, comparatively speaking, terrible. Why didn’t that matter to advertisers? (USA Today)

This week USA Today followed in Kyle Whelliston’s venerable footsteps and termed college sports a “bubble” that’s sure to pop sooner or later. Something strange happened in between the piece’s inception and publication, however, because the final product turns out to consist of a labored and rather convoluted lede placed atop the latest iteration of what has long been an excellent and even invaluable set of data.

For starters the nominal news hook presented by the numbers — most athletic departments operate at what they are pleased to term deficits — would seem to be something of an awkward fit for our traditional stock of “bubble” iconography. Maybe it’s me, but I always assumed that tulip merchants in 1637, the South Sea Company in 1720, Webvan.com in 1999, and subprime lenders in 2006 instead showed astronomic operating surpluses. In fact I rather thought this was precisely the red flag in those cases.

Nor is it clear why a bubble would aptly describe a revenue model now entering its sixth decade of “Seriously! Any day now!” impending legal doom. Finally, fretting about those darned young people and their cord-cutting in a piece based in no small measure on a brand new TV deal whose lead signatory is a legacy broadcaster founded in 1927 qualifies as still another curious ratiocinative choice, surely.

Far from being an “unstable situation,” college sports in general, college basketball more especially, and the NCAA tournament in particular instead present a series of successively smaller and progressively more advantageously situated concentric circles characterized by an unusual degree of hardiness solely as media properties. There are variables in play, naturally, and it’s not too much to term the threat of legal exposure “existential” — with regard to the NCAA. I don’t know who or what will be governing the sport in 2032, and I do trust that by then the players will have long since been receiving their fair share of the resulting revenues.

But if we view the essentials of the tournament as nothing more or less than 68 college teams playing 67 games of win-or-go-home basketball over three weeks from mid-March to early April, I’m yet to see anything even remotely persuasive in the way of a Book of Revelation. The essentials are eyeballs and basketballs, and if a tournament that earned record-setting revenues for a decade before, during and after the largest economic calamity since the Great Depression constitutes a bubble, well, put me down as bullish on this particular bubble.  END_OF_DOCUMENT_TOKEN_TO_BE_REPLACED

If we turned back the clock five months, here are the events that would have surprised me….

Things I missed badly on:
–Michigan State losing in the round of 64. I had the Spartans lasting a few games longer than that.

–Davidson being meh. I thought the Wildcats would be significantly better (like, NCAA tournament bid-worthy).

Things I didn’t even think to have an opinion on because I didn’t see them coming at all:
–Bo Ryan retiring in-season.

Every year a bracket comes out, and every year there’s plenty of yelling and screaming to the effect that this is the worst bracket in history and lovable mid-major X that just missed the cut has been traduced in a way no other team ever has been before. That’s what Sunday night and Monday morning are for. Then we promptly forget about the yelling and screaming and we savor the actual games.

The same sequence will play out in 2016, and that’s fine. In this brief, fleeting moment when there are no games, however, I want to hold on to this feeling of dissatisfaction for just a second and suggest that it’s the product of a selection process that’s undergoing an arduous and unavoidably public transition. If I’m right, many of the same bracket objections will be filed by we the people next year even if the committee doesn’t pull a Tulsa.

In effect the selection process is navigating three transitions at once. All three changes are difficult to navigate (or at least the NCAA’s making it look that way), and last night we saw the stormy petulance of an adolescent raging at its fate. END_OF_DOCUMENT_TOKEN_TO_BE_REPLACED