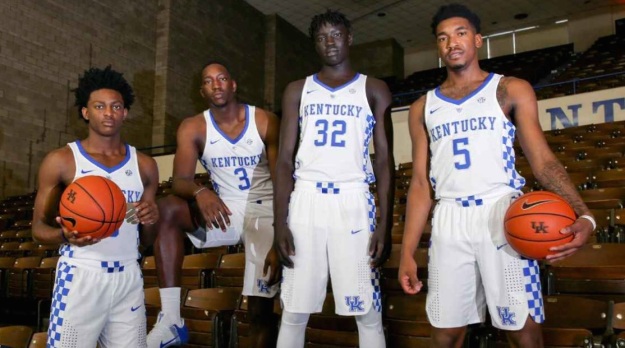 How many games will they win this season? What seed will they get in the tournament? Who among them will go pro next summer? Good questions. (Mark Zerof, USA Today)

I may be exhibiting the slightest degree of occupational bias, but it is my considered opinion that predicting future events in college basketball represents the most difficult forecasting gig there is, period. Please consider this post a tribute, then, to Ken Pomeroy, Dan Hanner, David Hess, and all of my intrepid colleagues who are engaged in this inherently hazardous line of work. It’s brutal out here.

If there’s a similarly daunting predictive challenge, I’m yet to find it. Other sports? Football introduces some interesting randomness, what with the microscopic number of games, alpha-and-omega nature of the quarterback position and win-probability-shattering pick-sixes. Yet somehow even the gridiron can’t give us anything to compare with Middle Tennessee State on March 18, 2016. (Spoken like a repentant forecaster.) At the end of the day pro sports and college football alike bequeath upon their predictors the cardinal blessing of year-to-year carryover in elite personnel. In college hoops, conversely, the best players by definition (almost) always leave.

The rational basis of (mostly) irrational hopes
So it’s natural that in such murky circumstances, we as college basketball fans would overcompensate by formulating some hidebound rituals of expectation based on observed facts. And the foundational observed fact in the one-and-done era is that the best player, best players, and/or best team might be as yet unseen.

To cite what is still the best and most telling example, the 2011-12 season really was defined and determined to an aberrant degree by Anthony Davis alone. People who had said in advance get ready for this incredible freshman were proven exactly right. In any given season, an AD can happen.

Even Davis had help, though, and a while back I wondered just how much veteran help the game’s most amazing freshmen received and/or required in extreme but paradigmatic cases like Kentucky in 2012 and Duke in 2015. That led me to the most unusual examples where teams have combined an incredible recruiting class with a fair amount of returning experience, a group of black swans I’ve referred to as category 5 rosters. I won’t re-bore you with those details here, except to restate a working assumption that college basketball at the highest level (currently Duke and Kentucky, full stop) has resolved itself primarily into a challenge of talent acquisition and sequencing, with the latter half of that quest being a particularly crucial if under-appreciated aspect of the game.

I suppose this category 5 stuff is a tendency and not an iron law that really requires you to return at least 40 percent of your possession-minutes from the previous season. I suppose if I went back in time to the summer of 2014, persuaded Duke sophomore-to-be Matt Jones to transfer to SMU or Texas to be closer to home, and then replaced him in the Blue Devil rotation with a suitably talented freshman small forward like, I don’t know, Stanley Johnson, not much would have changed. Most likely Duke would have still won it all, only this time with a ridiculously low figure for returning experience that would greatly distress and displease my tidy little round-number heuristic.

But if this is merely a tendency, it does seem to be a pretty strong one. Experience tells us that experience matters, even when a team has arguably the greatest recruiting class of the modern era. So it shouldn’t come as complete surprise to find that experience matters not only for teams with incredible recruiting classes but also for ones that are highly ranked in the preseason.

In the one-and-done era, exceptionally young teams in the AP preseason top 10 have not, on balance, performed all that well.

Plenty of doom to go around, right? Fear not, Kentucky fans. It’s not all darkness and portent….

Again, it’s understandable that we rank these young teams as highly as we do. We all saw Davis, and we all saw Okafor, Winslow, and Jones. It’s fair to say, however, that thus far the evaluative misses have outnumbered the hits.

The 100 teams that have been ranked in the AP preseason top 10 over the last decade have, on average, gone on to finish their respective seasons with a pre-tournament KenPom ranking of 12.6. I for one would term that an impressively low number which can be viewed as a tribute of sorts to the voters. (The average ranking of a perfectly predicted top 10 would be 5.5.) But over that same span the eight most inexperienced and callow preseason top-10 honorees — teams with less than 40 percent of their possession-minutes returning from the previous season — have significantly underperformed their more seasoned counterparts, finishing the regular season with an average KenPom rank of just 24.9.

Lucy and the football in college basketball
To be fair, a population as small as eight teams can be swayed by just one or two polling snap-hooks like Florida in 2015 or North Carolina in 2010. So let’s try a different course, dispense with the decimals entirely and look instead at what, to me, was one of the success stories: Kansas in 2014. That was one of the youngest teams Bill Self has had in Lawrence (though, remarkably, KU’s 2009 roster was even younger), yet the Jayhawks kept their coach’s incredible streak of conference titles going and even earned a No. 2 seed in the NCAA tournament. By the standards of similarly young teams, KU’s 2013-14 season has to be classed as a resounding success.

But imagine you went up to a Jayhawk fan in October of 2013 and offered the following spoiler:

“KU’s going to lose by 11 in the Big 12 tournament semis, lose by three to a No. 10 seed in the round of 32, and, before any of that and without much in the way of controversy or even notice, Andrew Wiggins will have lost Big 12 POY honors to a guy on a different team who will subsequently go undrafted and play overseas.”

The fan would have been disappointed because this particular “world outside” would not match the pictures in his or her head in the slightest. The unseen’s always so glamorous, and we know that this time really will be different and that the promise really will be fulfilled. Most of the time, however, the seen turns out to be rather more prosaic.

Speaking of the unseen….

Will Kentucky follow in the footsteps of similarly-young Kansas in 2014 and earn one of the first eight spots on the S-curve in the NCAA tournament? Will the Wildcats do even better than that and get all the way to the national title game as a top seed, a la similarly-young Ohio State in 2007? (If nothing else the forecast looks good for UK to achieve a modicum of regular-season glory — the SEC’s not shaping up to be what you’d call a murderers’ row.) Or will something rather more ignominious occur, whether said ignominy is slight (Duke last year) or severe (UNC 2010)? There are precedents for all of the above.