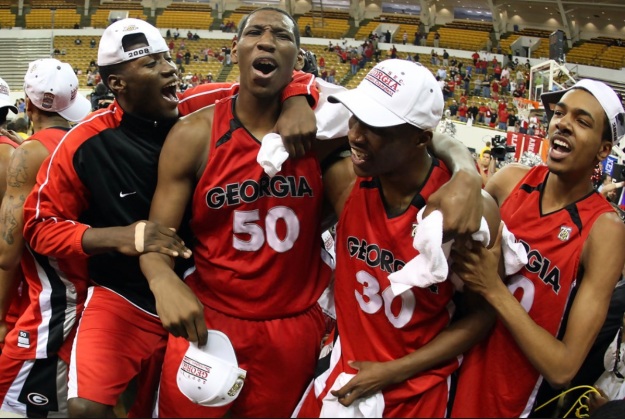 Georgia in 2008 was an honest to goodness bid thief. Then again, that was 10 years ago.

If you want to start an argument, put “The myth of X” across the top of your treatise, where “X” is something that actually does occur from time to time. I was tempted to title this post “The myth of bid thieves,” but why be pointedly belligerent when such teams really do exist?

Quick, what’s the most recent bid thief that comes to mind? I suppose Rhode Island last year might fit that description, but with the case of the 2017 Rams we’re already knee-deep in the unavoidable conceptual challenges posed by the very idea of a bid thief.

With a significant minority of bid thief cases — I peg it at about one-third of such instances — we actually don’t, and cannot, know whether they were really bid thieves. Put simply, Dan Hurley’s team may have earned an at-large last year if they had lost the Atlantic 10 tournament title game.

I call these instances 50-50 cases, and to my eye (and it is, to be sure, just one pair of subjective eyes) we have perhaps seen six of them in the last decade. Once these teams had all reached their conference tournament title games, we don’t really know what would have happened if any or all of them had missed out on an auto-bid. The safe assumption is that there’s no way all six of them would have earned at-large bids, but, similarly, it’s unlikely that none of them would have done so….

Faced with the task of counting how many bid thieves there really have been in the last 10 years, I chose to do something highly sophisticated and analytically complex with my list of 50-50 teams. I will take half the list (you can choose your favorites) and add the number three to the roster of 14 bona fide out-and-out bid thieves from the last decade….

So, sure, if you were a bubble team in 2010 or 2012, you really got a raw deal. Otherwise, this bid thief thing is actually a fairly rare occurrence, particularly of late, no?

The 14 teams on this list plus half of the six 50-50 cases gives us a grand total of 17 bid thieves — out of 305 conference tournaments played since 2008. That’s a hit rate of less than six percent, or, if you prefer, an average frequency of just 1.7 bid thieves per bracket. Make that 1.7 and falling. The bid-thief glory days appear to have been 2010, plus or minus a couple years.

Which, if you think about it, makes perfect sense. To be a bid thief, you have to play in a conference where at least one team earns an at-large bid. That rules out two-thirds of Division I at a stroke right there.

Now consider that a slim but measurable majority of conference tournaments, both at the major and mid-major levels, are won by teams that either had the best record during league play or that were tied with another team for the best such record.

It’s theoretically possible for a regular-season champion or co-champion to still be a bid thief, of course (Loyola MD in the 2012 MAAC may have come the closest), but it’s been at least a decade since we’ve seen that theory translated into reality.

In sum, bid thieves are a scarcity within a scarcity — leagues with at least one at-large team, but where the conference tournament’s won by an entrant that finished behind the at-large in the standings. That is a fairly tight set of constraints.

Note for example how the major conferences are mired in a rather remarkable bid-thief drought. Providence may have been a thief in 2014, but, otherwise, you have to go all the way back to Colorado in 2012 to find a clear one. (That was the Pac-12 tournament where, famously, CU athletic director Mike Bohn was busily meeting with NIT officials only to have the happy obligation of later telling them thanks but no thanks.)

If the major conferences no longer produce as many bid thieves, that means there won’t be as many, period. The NCAA tournament field continues to tilt toward major-conference programs, with the current bubble — extending across several hopefuls on both the “in” and the “out” sides of the cut line — made up entirely of such teams, with the sole confirmed exception of St. Bonaventure (and the arguable possible exception of Boise State).

To catch a rising bid thief in 2018, then, you’re looking at the following conferences in addition to the big six: American, Atlantic 10, Conference USA (assuming Middle Tennessee might earn an at-large), Mountain West, and West Coast. That’s it.

Bid thieves are no myth — they exist — but they’re mythic in the sense that they carry an outsized and inherently compelling reputation that’s nevertheless belied by their numerical scarcity. If you see one created in the next 11 days, treat it like a pretty special event. If you see two, record your contemporaneous thoughts and seal the document or video in your time capsule. They’re that rare.

It’s high time we had a sub-.500 conference tournament champion. We are clearly past due to see a conference tournament won by a team on the same level of shock and awe as Holy Cross two years ago. The Crusaders were 5-13 in Patriot play that season, a fact that did not prevent Bill Carmody’s team from walking off with its league’s auto bid (or from promptly being walloped by Oregon 91-52 in the round of 64). Teams that finish league play below .500 and then win the conference tournament anyway are a hardy and, I dare say, beloved perennial that, somehow, went missing entirely last year. Who knows, maybe we’re about to regress to that mean in 2018….

Dream large, underdogs. The underlying actuarial realities may be cheering for one of you.