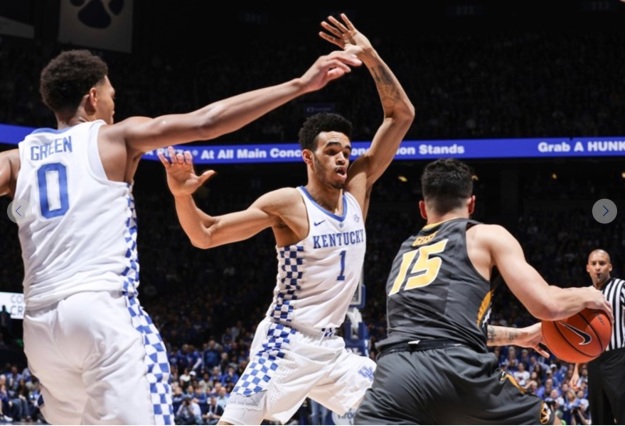 John Calipari’s even-younger-than-usual team has a chance to make some history in 2018. This could turn out to be the most effective perimeter defense we’ve seen in the last five years in major-conference play, eclipsing the mark set by the storied UK team of 2015:

The Wildcats’ prowess at or good fortune in forcing misses from beyond the arc is important for understanding this team in performance terms. Actually, said ability-slash-happening is, by far, the outstanding characteristic of an otherwise so-so defense. Can it continue?

Of course! All those opponent misses are in the books, and Kentucky’s within 140 possessions of the end of its regular season, give or take. What do you think, we’re going to play a thousand neutral-floor games and smooth all these weird numbers out once and for all? March arrives in a few hours. Get that “Stunningly Great Perimeter Defense” trophy ready.

That being said, an equally important question going forward for potential SEC and NCAA tournament opponents is perhaps whether this level of defense reflects intrinsic merit, fortuitous occurrences, or some mix of both.

The case for intrinsic merit is easy. Look at the No. 2 team on the list above, and one might reasonably infer that Calipari knows a thing or two about pressuring shooters beyond the arc. Not to mention the Wildcats rank No. 4 in the nation on Ken Pomeroy’s effective height statistic. Length on the perimeter (cf. 6-foot-5 Hamidou Diallo and 6-foot-6 Shai Gilgeous-Alexander) is one time-honored method for putting an opponent’s three-point shooters under duress.

Nevertheless, there’s likely something to be said here on behalf of fortuitous occurrences, as well. The first thing to note is that Calipari’s undeniably feisty and lengthy youngsters have additionally been dealt a royal flush by fate. Indeed, it’s as if they went to a Zoltar machine and said, “We want to set a record for three-point field goal percentage defense.”

There are 13 other teams working hard to make that wish come true, for it turns out the SEC is terrible at making threes even when Kentucky’s vaunted perimeter defense isn’t on the floor. In terms of perimeter accuracy, this is the worst major conference we’ve seen since UConn was still winning national titles.

Is the fact that Kentucky holds a priori accuracy-challenged opponents to 27.3 percent 3-point shooting really so much more impressive than Virginia limiting ACC teams to a 29.0 percent success rate from out there when the Cavaliers’ league as a whole is hitting 35.7 percent of its threes? Fair question.

Then there is, unavoidably, the more metaphysical matter of three-point defense itself, and whether or not it, you know, actually exists. Mr. Pomeroy has looked at this question at some length, and he has pegged the offense’s share of responsibility for three-point accuracy at 83 percent. That is a specific and, more importantly, rather large number.

Yet even Ken “Your perimeter defense only has 17 percent control” Pomeroy elucidated what he termed a “Boeheim exception” to this all-about-the-offense dynamic. Basically, Ken theorized that excellent interior defenses (such as, one might add, Kentucky’s in 2015) may see a benefit in terms of perimeter D, as overmatched opposing offenses are forced into trying tough threes that they would not otherwise attempt.

I’m going to ever so slightly broaden the Boeheim exception into something I’ll call nuisance value, because I think the term captures what we’re seeing, for example, from Tony Bennett’s aforementioned Hoos this season. Virginia’s interior defense is really good, of course, but it’s certainly no Michigan State. Still, ACC opponents are terrible at making threes against the Cavaliers. Why?

One might surmise that, after nine years, the rest of the ACC has received the memo and concluded there’s seldom a good and sufficient reason to take the ball into the lane against a Tony Bennett half-court defense unless your name happens to be LeBron, Giannis, or something equally transcendent. So, yeah, players with other names may choose to try a three against one defender instead of taking on a frenzied horde of those guys inside the arc.

But getting back to Kentucky, do we see this kind of nuisance value raising its effective perimeter-defense head in Lexington? Well, no. SEC opponents are doing just fine making their twos against one of the tallest defenses in the country.

Basketball is surely not the best place to find occurrences that are either all luck (try a slot machine) or all merit (bowling?), but the specific case of the historically great 2018 Kentucky perimeter defense may possess a bit more of the former than the latter. Then again, if the Wildcats keep scoring 1.25 points per possession, as they’ve done during this current three-game win streak, the question itself will be a forgotten February relic buried by fresh March glories.

Why no nuisance value in East Lansing? If there’s a relationship between very good interior defense and forcing misses on the perimeter, we would plausibly expect to see that dynamic play out in the case of Michigan State this season. Indeed, the Spartans finished Big Ten play holding opponents to 39.9 percent shooting on their twos. Any final number starting with a “3” in this category will secure your place alongside Stanford 2000, Kentucky 2015, Texas 2015, and other such venerables, but why isn’t Tom Izzo’s team seeing a nuisance-value benefit in terms of perimeter defense?

The Big Ten drained a below-average but still pretty normal 33.8 percent of its threes against one of the best interior defenses we’ve seen this decade. Could the same “let them dribble and pass all they want out top” approach that drove MSU’s opponent turnover rate down to historic lows be giving shooters the space they need to come surprisingly close to 50th percentile performance? Perhaps March will yield an answer.