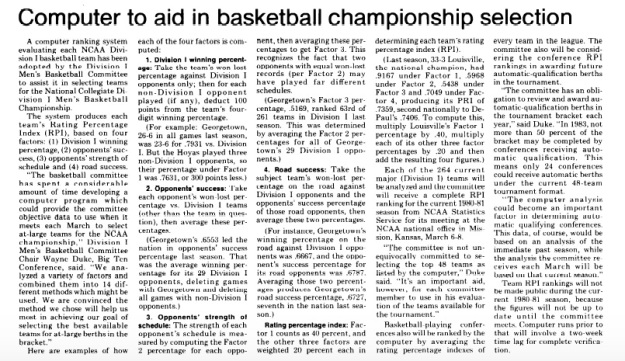 The Ratings Percentage Index, a misbegotten multi-sport statistic that mistakenly became an object of misplaced obsession for everyone connected with men’s college basketball, died Wednesday at the age of 38. The death was announced by the metric’s lone sponsor and last surviving adherent, the NCAA.

No official cause of death had been announced by Wednesday afternoon, though the RPI had long suffered from complications associated with chronic analytic confusion.

When the RPI was born in the fall of 1980 (no definitive birth date has ever been established), college basketball games were only sporadically televised, the NCAA tournament field consisted of 48 teams, and the men’s basketball committee had little or no reliable data with which to support its selection and seeding decisions.

Into this vacuum stepped the newborn RPI. In this sense the statistic, created by NCAA staffer Jim Van Valkenburg and a team of analysts working under his direction, represented an advance over methods used previously.

For example, when the tournament expanded from 48 to 52 teams in 1983, the NCAA seemed to revel in its newfound high-tech evaluative prowess. Louisiana Lafayette, Utah State, and VCU all received at-large bids that year, a mid-major uprising that would have been unlikely without the statistical backing and tacit imprimatur of a computer printout.

Nevertheless, the RPI showed troubling signs of erratic behavior even in its early years. When, in the mid-1980s, committee member and former Duke head coach Vic Bubas had two interns compile records of how teams did versus RPI top-50 opponents, he unwittingly set the statistic on a multi-decade path of sowing rampant analytic confusion.

Though no one correctly diagnosed the condition until it was too late, the RPI was in fact born with a fatal mathematical flaw. It foregrounded strength of schedule severely and indeed dispositively at the expense of actual basketball performance.

For the last 30 years, the most important single day in any team’s year in terms of its chances to earn at at-large bid has been the day that the program releases its schedule. This should have been a red flag, but, instead, the NCAA and, more surprisingly, college basketball observers collectively adopted the belief that how well you do at making a schedule that pleases the NCAA was somehow related to how well you play basketball.

True, by the last decade of its life, the RPI was increasingly kept out of the public eye by an NCAA that seemed correctly embarrassed yet oddly slow to pull the plug. At the mock selection exercise held by the NCAA in 2012, for example, members of the actual men’s basketball committee pointed out that in the mock exercise the RPI was rarely mentioned — odd praise indeed for one’s preferred metric.

In fact, the RPI, while marginalized discursively, was influential right to the bitter end. Even as late as the 2018 selection, an Oklahoma State team that posted the same Big 12 record as Oklahoma and that indeed had defeated the Sooners by 11 points on a neutral floor four days before Selection Sunday couldn’t get as much as a sniff from the committee. It turned out to be the RPI’s defiant swan song.

No sport in the world — amateur or professional, team or individual, men’s or women’s — is as obsessed with schedule at the expense of performance as men’s college basketball in the United States. That is the RPI’s legacy, and the obsession will not subside instantly in the aftermath of the RPI’s demise.

The NCAA is yet to announce what if any funeral arrangements have been made, though spontaneous celebrations were reported to take place Wednesday in numerous locations around the country as word of the death circulated.

Still, some long-suffering college basketball fans reportedly regarded the announcement as “fake news,” and approvingly quoted Winston Churchill’s response when he heard of the death of a longtime political rival: “Embalm, cremate, bury at sea! Take no chances!”