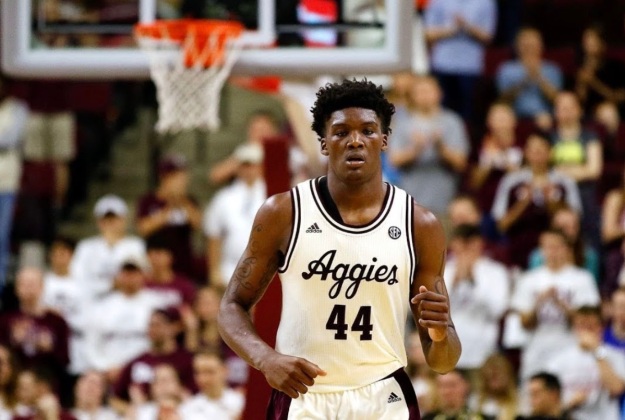 Even Robert Williams attempted 12 three-pointers last season. (Don’t ask how many he made.)

The 2018 NBA draft is now just hours away, and it’s already a virtual certainty that the 30 players selected in the first round will be far and away the most perimeter-oriented such group we’ve ever seen.

Just how different is this 2018 bunch? Here’s a handy graphic representation…

Behold, seven years of first-round picks. I’ve even thrown in a special bonus surprise in the form of the 2018 first round. No, it hasn’t happened yet, but I trust a fair portion of these players will in fact hear their names called. (I’ve used Jonathan Givony’s projected order of selection.)

Players highlighted in yellow devoted five percent or less of their shot attempts to three-point tries in the college basketball season leading into their draft. Note that, in what would be a paradigmatic first, there very likely will be no such players in the 2018 first round. Meaning, yes, Robert Williams, with his 0-for-12 performance from beyond the arc on 220 total attempts, just barely clears said bar.

It’s fair to say this represents something of a sea change in basketball. There have been years in the recent past (cf. 2012) when North Carolina alone sent more than one player into the first round who’d devoted less than five percent of his shot attempts to three-point tries. Florida won back-to-back national titles a little more than a decade ago with two such starters on the floor together much of the time.

We won’t soon see such shot selection choices again from the very best players in the country. Now, an occasional three-point try is understood to be the accustomed and indeed obligatory behavior for any NBA-bound 4- or 5-man.

In fact, where once first-round picks were markedly less perimeter-oriented than college basketball as a whole, that gap is now rapidly closing. It’s likely that the college players chosen in the first round on Thursday night will have devoted about 36 percent of their collective 2017-18 shot attempts to tries from beyond the arc. That’s really close to the average for Division I as a whole (37.5).

Percentage of shot attempts from beyond the arc, 2007-18

It’s not just that first-rounders are arriving in the NBA having shot more threes in college than they used to (though this is of course true). That would be mildly interesting, but, with the entirety of professional and collegiate men’s basketball in North America shooting more threes, such a development would merely put first-round picks solidly in the mainstream.

No, what’s really intriguing is that the tiny population of first-rounders has changed its shooting habits in the historical blink of an eye and has exhibited a dramatic rate of increase for perimeter orientation. As recently as two years ago, players taken in the first round were still, collectively, much more interior-oriented than the bulk of Division I. (Just to touch a few bases: Ben Simmons, Jakob Poeltl, Domantas Sabonis, Brice Johnson, Pascal Siakam, Skal Labissiere, and Damian Jones.) That moment is gone, possibly forever.

This increasing emphasis on perimeter shooting, even for bigs, has changed the fundamental evaluative frame in which the sport is played.

Up until a few years ago, we worried about 6-foot-8 guys going up against seven-footers because we assumed those little guys were just less effective versions of their taller opponents. Now that expectation’s been not so much turned on its head as expanded in a new direction. Now we worry about the taller player guarding the little guy “in space” or “out on the floor.”

The change in approach on offense has also had the paradoxical effect of elevating the offensive efficiency of NBA big men (they now have far more room to operate than they were given in the trench wars of the 1990s and early 2000s) while at the same time making them something more akin to a parity product (not just stars but, now, even league-median big men can score well thanks to all the space). My colleague Kevin Pelton has charted all of the above and drawn the logical if rather unsettling conclusion for this draft and, perhaps, ones still to come:

[T]he top teams in this year’s draft could be investing precious picks into centers not dramatically better than those available at relatively low prices in free agency, and players who may have a tough time making an impact deep in the playoffs if their teams become contenders.

That doesn’t mean players who don’t shoot threes are going to disappear from the NBA, much less from D-I. Last I checked, Clint Capela is still being held up as some kind of new-era rim-running paradigm, and he attempted 442 shots for the Rockets this season with just one of those being launched from beyond the arc. (For the record, he missed. Take heart, Robert Williams.)

Still, the fact that even Capela watched from the bench as 6-foot-6 teammate P.J. Tucker took his spot during stretches of crunch time in the Western Conference Finals is perhaps telling. Kevin asks whether in 2018 we’re about to watch analytically woke NBA franchises sleepwalk into drafting “for an era that no longer exists.”