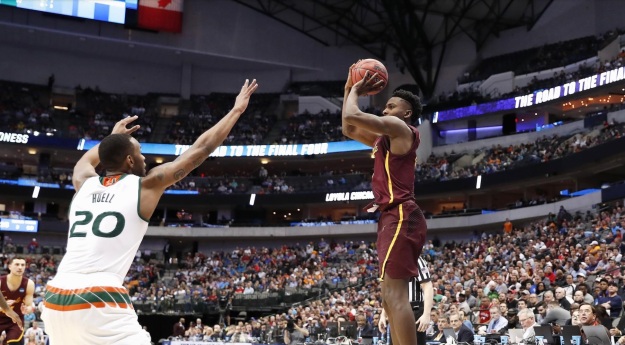 When a No. 11 seed gets an automatic bid at 28-5 and then makes the Final Four, the irresistible temptation is to draw lessons from that tournament run with regard to selection. A team as good as Loyola Chicago, it is said, should have been in the running for an at-large bid even if, by chance, the Ramblers had lost to Illinois State in the Missouri Valley tournament final.

I know it is said, because I’ve said it.

Of course, it would be nice to think the committee would have looked at Loyola’s 28-5-ish record and win at Florida and given them an at-large. But the treatment visited upon SMC’s 28-5 record and win at Gonzaga counsels against such counterfactuals.

Just so we’re clear, however, the fact of the matter is that we knew or should have known before the NCAA tournament that Loyola was good enough to merit an at-large bid. Porter Moser’s team outscored the No. 9 KenPom conference in Division I by 0.16 points per trip. That’s a classic bid-worthy profile, up there on the same at-large bleachers as VCU last year (a No. 10 seed), BYU in 2015 (another No. 11), or Creighton in 2012 (a No. 8).

So, yes, the very fact of the Ramblers does give us a handy floodlight to shine on the multi-decade wrong of mid-majors being disadvantaged on Selection Sunday. Shine on, Sister Jean, and do your good selection-reforming work based on this team’s first 33 games.

Now, as for Loyola’s ensuing four contests, using NCAA tournament success or failure as ex post facto justification for whatever argument we wish to advance is surely a fool’s errand. With Moser’s guys in the Final Four, an excellent point (mid-majors suffer a structural injustice every Selection Sunday) is being supported with the most shoddy of proofs.

The need to fundamentally rethink selection would no less pressing even if Donte Ingram’s shot had not fallen against Miami, or even if Clayton Custer’s shot had not bounced in against Tennessee, or even if Marques Townes had not salted the game away with a three against Nevada. We knew before the tournament that Loyola was good enough to play coin-flip games against all of the above.

Never let NCAA tournament wins alone carry your agenda, whether the point you’re making is that one-and-done teams are or are not the strongest, perimeter-oriented offenses will or won’t win, mid-majors do or do not deserve more bids, slow-paced favorites are or are not doomed, or whatever. There will always be a geometrically larger number of losers in that same polemic silo to argue in the negative.

Yes, it can be hard to resist the temptation to use tournament performance as ammo when the run in question appears to argue on the side of the angels. But saying Loyola’s sprint to the Final Four proves that the committee’s ways are dumb is categorically identical to saying UCLA making the 2015 Sweet 16 was proof that the committee had in fact been wise and clairvoyant to dumbfound everyone in real time by giving the Bruins a bid. Neither argument holds water.

Part of the reason I love the NCAA tournament is that, to my subjective eyes, it hits the sweet spot in between predictability and chaos. Add more predictability, and you have an overdetermined Gramscian monolith like college football. (Gee, I wonder which one of the same group of five teams will win the national championship for the ninth year in a row next year!) Add more chaos, and you have roulette.

The tournament hits this sweet spot after a fashion every year, and No. 1 seeds like Villanova and Kansas are still standing. Lately I’ve been given to wonder whether such top seeds might best be regarded as worthy and deserving survivors that have nevertheless crossed trap doors that simply failed to open.

Meaning you can perform at a high level in the tournament and still lose, and one common trait shared by a striking number of recent Final Four participants is that they’ve been fortunate in at least one aspect of the game that’s 83 percent outside their control.

Mind you, remarking upon bad three-point shooting by opponents is no slight against these excellent teams and their runs. Villanova, to take one example, is outscoring tournament opponents by no less than 0.27 points per trip. Normal three-point shooting from opponents would have made these games closer but would not necessarily have changed the results.

Rather, seeing the hoops gods have their capricious fun within elastic but fairly well defined limits in a single-elimination format is but one more salutary reminder. Our strongest arguments are the ones we can make and support before the round of 64, and way back then we already knew that mid-majors such as Loyola deserve a far better and more just method of selection. That would be every bit as true even if the Ramblers had lost to the Hurricanes.