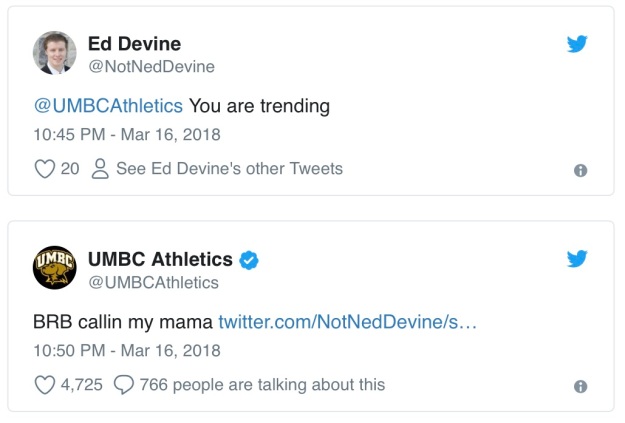 Virginia has unwittingly offered itself up as a near-perfect test case on the potential relationship between a slow tempo and very bad tournament performance. But, before we sift that rubble, a word of respect is in order for fans of a team that has somehow wandered into such an analytically convenient yet expectation-crushing artillery range.

Cavalier postseason futility is no Bill Self case, where the woke analytic point to be made is that the underlying perception is itself mistaken. Here, the perception is accurate and unavoidable.

No other team comes close in terms of quantifiable NCAA tournament misery, and the trail of statistical ugliness is easily explained. UVA keeps getting beautiful seeds, and then bowing out extraordinarily early. (The 2016 and 2017 tournaments being, in retrospect, exceptions of rare normalcy.) To gloss over that, much less to pretend otherwise, is to do traumatized Hoo fans a manifest disservice.

The Cavaliers’ record in the postseason was already measurably awful before UVA went and did something that has never been done before. Now, that track record is downright extraordinary, and not in a good way.

If one of the slowest teams in Division I has recorded possibly the worst multi-tournament performance of any elite program, the convergence of two superlatives has to be explanatory, right? Very good question.

Nevertheless, the very enormity of the UMBC event, a game that bids fair to define the 2018 tournament decades into the future, should perhaps caution us against overfitting a narrative of straight pace determinism. In other words, reacting to a No. 16 seed scoring 1.53 points per possession over an entire half by pointing at, of all things, tempo, is an interesting choice. Varying the hypothetical tempo of that game just adds to or detracts from the Retrievers’ margin of victory. On that night, at least, if the game had gone to 80 possessions, the Hoos might have lost by 35.

We see this because performance varies to a far greater extent within the confines of a single game than pace ever can under a shot-clock regime. If we didn’t know it before, we know that now — or should — in our post-UMBC world.

Saying Virginia would have won a best-of-seven series against the Retrievers (this is a correct statement) is worlds apart from suggesting the Cavaliers could have won the actual game that was played against Ryan Odom’s team on March 16, 2018, with its actual first 62 possessions if we could just extend that game to an average length (six more possessions). Pace determinism fails to acknowledge the randomness and, most crucially, path dependence baked into the occasion itself.

Loyola Marymount in 1990 notwithstanding, 99 percent of basketball as a sport situates itself rather stolidly within the velocity boundaries of 1.5 (slowest college teams) to 2.2 (fastest NBA franchises) possessions per minute. That’s a notable difference in percentage terms, sure. Still, to say things would be vastly different for an elite college team if only they’d listen to us and play at 1.7 possessions per minute is analogous to hectoring the Rockets for not logging 2.5 trips per 60 seconds. You’re favored! Go marginally faster within the narrow confines imposed by your shot clock, and you’ll surely be undefeated!

Maybe this is why fishing expeditions to actually find the intuitive pace-driven advantage for favored teams have tended to come up empty. A couple weeks ago, I reimagined Virginia as playing at the fastest pace seen in major-conference basketball, and didn’t find much of a bottom-line difference. Then, this week, Ken Pomeroy cast a much larger net and didn’t find significant variance in win percentages recorded by big favorites across games of differing (low and high) two-team point totals.

If the specific bill of indictment against going slow is NCAA tournament performance, however, perhaps there’s one additional spot to explore. It may be worth reaching for the tweezers and testing, on a much smaller scale but at a much more visible time of year, what one might term the Billy Beane theorem. In the immortal words of the trailblazing baseball front-office thinker, the idea is that, whether you’re talking about the A’s of the early aughts or the Virginia basketball team we see before us now, maybe this regular-season s^%t just doesn’t work during the playoffs slash tournament.

I scooped up the 160 teams that were seeded on the Nos. 1, 2, 3, and 4 lines in their regions in the last 10 NCAA tournaments. These are the teams that were favored in a win-or-go-home setting, the ones that wore home uniforms in not one but two games (if they made it that far) the first weekend.

To measure how well these top-four seeds did in their respective brackets, I compared their number of tournament wins to what every other team that’s had the same seed since 1985 has recorded (i.e., PASE, performance against seed expectation). And, to gauge the speeds of 160 rosters that spanned two different shot clocks, I compared each team’s tempo during conference play to the average pace of their league that year.

Crude, perhaps, but fast and simple. I had my population of 160 teams, a measure of how well each one did in the tournament, and an era-neutral way of recording how fast they had played.

I started where you’d expect, by looking for an overarching relationship between pace (both fast and slow) and tournament performance (both good and bad) among high seeds. I couldn’t find it. (Correlation coefficient: +0.09, i.e., throw that dart blindfolded.)

Then I looked for a negative relationship between tournament wins and tempo within a smaller population of 42 unusually slow-paced high seeds. I couldn’t find that (+0.06, throw it blindfolded after someone spins you around).

Lastly, I looked for a positive relationship between tournament wins and tempo within a smaller population of 53 unusually fast-paced high seeds. I couldn’t find that (+0.04, throw it blindfolded after someone spins you around when you’ve been drinking).

What I found instead was randomness. Incorrigible, inchoate, indomitable randomness, spread out over 160 tournament runs. 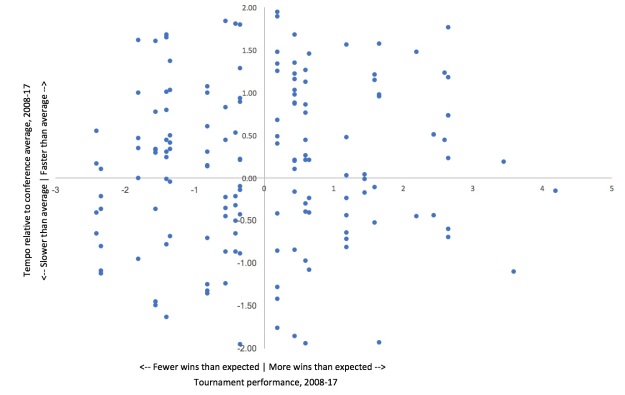 (Teams line up in columns here because there are only four values for expected wins for top-four seeds, and those values plus or minus a whole number — i.e., actual tournament wins — result in these cool vertical towers. The second dot on the right, the very slow-paced one, is the 2016 national champion. A measurably deliberate tempo was not a problem for that No. 2 seed.)

Make of that what you will. Here’s one possibility.

Maybe this sport is random enough to encompass Virginia losing to UMBC by 20, yet also deterministic enough to give us the 2015 and 2008 Final Fours. College basketball’s results are more random than its talent distributions, so the sport feels crazy compared to an NBA that doles out win-or-go-home basketball only in game sevens.

We celebrate this randomness in results (particularly on a tournament’s first weekend, not so much during the second), but it comes at a cost that every Virginia fan understands all too well. Who knows, maybe the Cavaliers will speed up next season and win a national title. That would be far from the craziest thing the sport’s dished out for us. Our provisional understanding in the meantime, however, is that the Hoos appear to have been done in over these past few tournaments not by their pace, but by March itself.