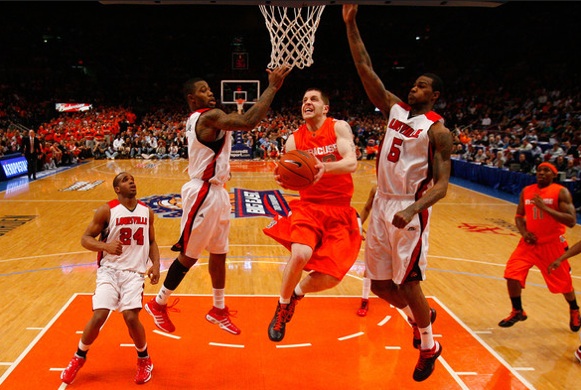 My unplanned multi-day ACC festival continues! Yesterday I pointed out that the 10 programs that constituted the “other” teams in the pre-expansion league — Boston College, Clemson, Florida State, Georgia Tech, Maryland, Miami, NC State, Virginia, Virginia Tech, and Wake Forest — haven’t been very good at basketball over the past eight years.

Today I want to flesh out the “Who cares?” objection to that line of critique. So:

Let’s agree to call this the “I don’t care about DePaul” school of conference assessment, and what it lacks in top-to-bottom comprehensiveness it more than makes up for in actual usage by fans and commentators.

Thus the paradox of the sassy new-look ACC is as follows:

This paradox isn’t as crazy as you think. Just because teams at the bottom of the ACC will continue to struggle doesn’t mean the top of the league can’t be historically good relative to other leagues’  top halves (or thirds). In fact, I’m all but certain that the ACC really will be praised in the past tense as the best conference ever, and I even have proof. It’s called the Big East between 2009 and 2011.

When people say “this is the greatest conference ever,” it’s a pretty safe bet they mean “this conference certainly has a very high number of really good teams.” One way of measuring that is by means of the NCAA tournament seeds that a league earns in a given season. And from 2009 to 2011, the Big East had the greatest run of earning high seeds we’ve ever seen in the modern tournament era.

Let’s give a conference points for each top-four seed it earns (on a sliding scale with four points for a No. 1 seed on down to one point for a No. 4). On this measure, the best conference seasons since 1985 look like this:

There are a couple of things I like about this particular gimmick. First and most obviously, it can reach back nearly 30 years and allow us to give the late 1980s and entire 1990s their due, something we can’t always easily do with our tricked-out stats from the 21st century.

Second, the fact that the nine-team ACC from 2004 (10 seed points) barely missed a list dominated by the 16-team Big East shows me that conferences of differing sizes can be weighed on something that at least approaches an equal basis. (As does the fact that the 16-team Big East could post a number as low as five in 2007.) All we’re doing here, in effect, is looking at how strong each conference’s top three to five teams were judged to be in a zero-sum setting (there are just 16 top seeds available) at the end of each regular season.

The ACC doesn’t have Louisville yet, but when it does the league will have no fewer than five teams — Duke, North Carolina, Syracuse, Pitt and the Cards — that earned No. 1 seeds just in the last three tournaments. No other conference can come close to making that claim. Assuming the ACC can simply hold on to its membership, it’s only a matter of time before the league is having an incredible Selection Sunday.

Try this as an experiment in retroactive conference realignment. If the powers that be had gotten their acts together and created the 2014-15-vintage expanded ACC, say, in the summer of 2008, the conference would have already recorded the two best seasons of the modern tournament era in terms of seed points.

Naturally the ACC will have to capitalize on all those high seeds and actually win tournament games. Don’t forget how everyone yelled at the Big East when the league dropped the ball in 2011. (Well, kind of dropped the ball. Connecticut did win the whole thing.) But if you give the ACC enough swings at this pitch, the league is going to deliver. I expect to hear “best conference ever” sooner rather than later once Louisville joins the fun.

BONUS fun with seed points! Wow, the Pac-12’s been unremarkable in seeding lately. You’ve seen the top of this particular list. Here’s the bottom:

Since the dawn of the modern tournament era there have been 174 major-conference seasons played through to completion. In all that time a major conference has been shut out of a top-four seed just 11 times. In theory this is something that has just a six percent chance of happening, but darned if the Pac-12 (formerly the Pac-10) doesn’t keep getting hit by this lightning. The league has now seen four tournaments come and go without a top-four seed. No other major conference has ever been shut out twice in a row, and, as seen here two of our major conferences have delivered top-four seeds to the tournament 29 times in a row and counting. ACC and Big East, I salute you!