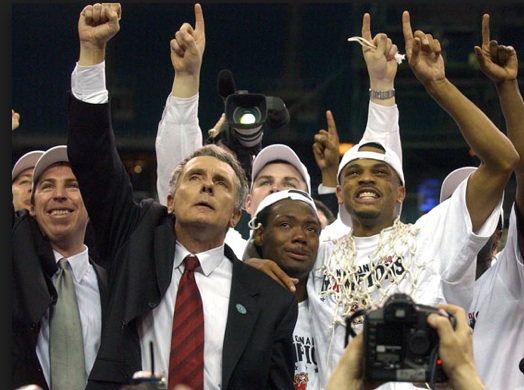 ACC teams besides North Carolina and Duke used to do well in the NCAA tournament. But it’s been a while.

Every year we expect an ACC team besides North Carolina or Duke to finally break through, for lack of a better term, and certainly Miami seemed to fit that bill last year. The Hurricanes won the regular-season championship outright at 15-3 and took the ACC tournament title as well.

Maybe Jim Larranaga’s success in 2012-13 can provide a blueprint for the ACC’s non-Carolina and non-Duke programs. Certainly a blueprint is needed. That No. 2 seed the Canes got last year stands out in historical terms. Florida State received a No. 3 in 2012, but otherwise no ACC team not named “North Carolina” or “Duke” has secured anything higher than a No. 4 since Wake Forest was on the 2-line in the 2005 tournament.

And with the conference’s performance once again earning the wrong kind of headlines, this seems an appropriate moment to reflect on a rather weighty question:

What in the world happened to the rest of the ACC these last few years?

At least every team in the league has won a tournament game (if you count Clemson’s “Preliminary Round” victory over UAB in 2011). Still, it hasn’t exactly been an era of untrammeled NCAA success for teams outside of Chapel Hill and Durham — just 20 wins in 80 team-seasons.

By way of comparison, let’s deprive the Big Ten of its two winningest NCAA tournament teams over the past eight years. Farewell, Ohio State (17 wins) and Michigan State (16). How has the rest of the league fared, even if we retroactively “add” Nebraska for the duration of that time? Pretty well, actually.

Of course one could say the Big Ten has its own ACC-variety upward mobility problem, namely, a third of the conference hasn’t won an NCAA tournament game in eight years. That’s not ideal, but the good news is the other two-thirds of the league has produced 67 tournament wins. Note additionally that in terms of performance Illinois has been a garden-variety middling ACC team trapped on the prairies. The rest of the league has been rather neatly split according to whether it’s better or worse than that profile.

It’s not a huge surprise to find that the Big Ten’s mid-section has had a better last few years than the ACC’s. But what about a conference like the Pac-12? Everyone’s always saying the Pac-12 is “back,” which of course is another way of saying it hasn’t been very good. Take away UCLA (15 NCAA tournament wins over the past eight years) and Arizona (eight), and here’s the rest of the league:

For all the derision the Pac-12 has endured of late, its iceberg section has actually outperformed the corresponding portion of the ACC over the last eight NCAA tournaments.

Now the good news for the ACC. By the time you get to the football-centric and oft-abused SEC (not including newbies Missouri and Texas A&M) and you deprive them of Florida (21 tournament wins) and Kentucky (15), you almost have something the rest of the ACC can finally pick on.

The “rest of the” SEC has won the same number of NCAA tournament games over the last eight years as the rest of the ACC, but at least the former conference got a Final Four appearance, two Elite Eights, and five Sweet 16s out of those wins. Not bad for a football league.

If you saw all of this coming circa 2005, take one step forward. To me it’s been a surprising turn of events for five-sixths of the ACC.