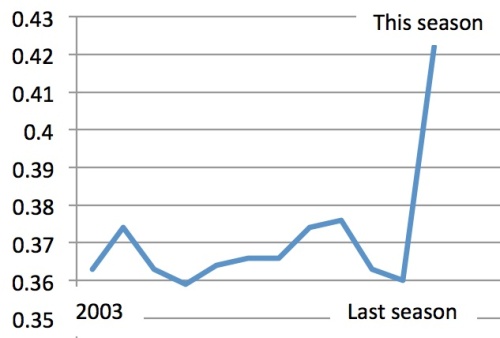 I think I see a trend.

Depicted here in all its scintillating glory is Division I’s median free throw rate (FTA/FGA) from 2002-03 through last night, courtesy of Ken Pomeroy’s vault. As is plain from the upside-down 1929 line, the FT rate has been notably robust over the first 12 days of the 2013-14 season.

What this suggests for the season as a whole is still an open question. As Ken pointed out last week, turnovers have dropped more or less in lockstep with the jump in the free throw rate, meaning I could show you a really cool graph with the TO rate dipping about as dramatically as the FT rate has spiked. Maybe both developments will regress toward their respective means as the season unfurls, or maybe we’ve embarked on a new era of low-turnover high-free-throw ball. At this point it’s anyone’s guess.

Seth Davis weighed in on this with a really good piece yesterday, saying that the “new rules” discussion has been widely misunderstood (he’s right) and that in fact there’s been no “huge impact” on the game as a result of the new emphasis on enforcing the rules as written. While I think Seth’s correct that we should all take a deep breath and relax about the whole deal, I want to be clear on why I think that’s a sensible course of action even though the FT rate has clearly registered a significant increase. (Last week Ken found an 18 percent increase in the mean free throw rate compared to the same period last season, while the median FT rate graphed above has shown a 17 percent uptick compared to the entire 2012-13 season.)

Whether my “significant increase” is your “huge impact” is of course up to you. In purely anodyne descriptive terms we can say that from 2003 through the 40th minute of Louisville beating Michigan the sport had a pretty steady free throw rate. Now the rate is up, and the increase may not be entirely an early-season artifact aided and abetted by November blowouts (because the early games last year showed a normal FT rate).

In the abstract I don’t particularly want a higher FT rate, but as a practical matter if the sport henceforth exhibits one due to increases in both free throws and FGAs (which is what we’re seeing early this season) I’m not going to be sitting behind the bench or in front of my flatscreen thinking “Hmm, this game feels more 0.42 than 0.36 to me.”

The best thing about the new higher FT rate is that it’s a bone to be tossed to those who thought the game was in urgent need of fixing before this season. These reformers can point to the new FT rate and say finally! Something is being done about the problem.

I, conversely, am in the curious position of agreeing with the reformers that enforcing the rules as written is fine and good, but disagreeing with them that there was a clear and present danger in the first place. I actually thought the game was already in fairly good shape, and if you allow me to strangle a few timeouts and put one misbegotten team rating system out to pasture I’ll be happier still.

If the college hoops aficionados who like to fret about a declining quality of play are mollified by a somewhat faster-paced game which features more points, more shots from the line and from the field, and fewer turnovers, I will not spoil their fun, for they have by no means spoiled mine. I may wonder whether said aficionados are to some extent projecting extraneous motivating factors that correlate suggestively with certain demographic characteristics onto the whiteboard of our sport. But as a straight quid pro quo I’ll gladly support a 17 to 18 percent increase in the FT rate if it means I can’t do another post like this next season. I’ll take that deal in a heartbeat.