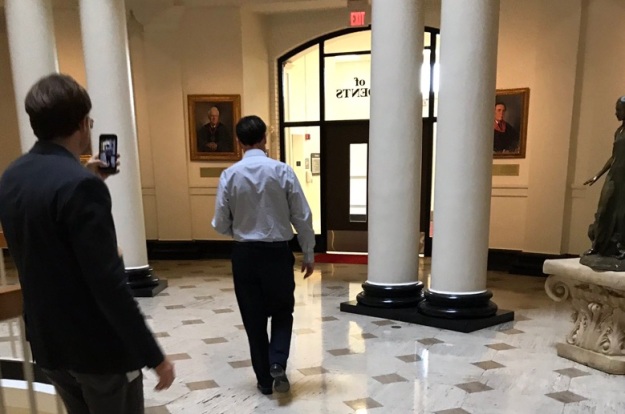 Rick Pitino was a rarity even among the tiny group of elite coaches at the top of the college basketball pyramid. Let’s define that elite as active coaches who have either won multiple national titles or been to six or more Final Fours.

With the possible exception of Tom Izzo, the Louisville head coach appeared to rely less on recruiting top-20 talent than his fellow legends. He demonstrably relied on it less than John Calipari or Mike Krzyzewski, for example, but he also relied on it less than Bill Self or even a relative youngster like Sean Miller.

I had occasion to make this same point when the Louisville staff was found to be cheating on its recruiting by enlisting the assistance of strippers and escorts. That particular episode had zero measurable impact on recruiting. In point of fact, Louisville hasn’t signed an RSCI top-20 recruit since Samardo Samuels arrived on campus in the fall of 2008.

Correction: Louisville hadn’t signed a top-20 recruit until this summer. Then No. 16 prospect Brian Bowen surprised a number of observers by declaring his intention to be a Cardinal.

You know the rest. The coach who didn’t need top-20 players in order to win the 2013 national championship is gone, because his staff’s been charged both with hiring strippers and escorts to entertain recruits and with conspiring with Adidas to funnel a six-figure cash payment to Bowen.

Maybe we’ll get the true story, someday, from some combination of court testimony, leaks, and tell-all autobiographies. But today, in advance of discoveries still to come, there’s one thing we can already say with confidence.

Any telling of this story will be fascinating. The plausible tellings could at a minimum include the following:

“Pitino knew about alleged Bowen shenanigans.” What an idiot. Also, some nerve, huh? The guy who held on to his job by loudly proclaiming his ignorance and therefore innocence in the aftermath of the escort scandal turns out to be cognizant and nefarious (in the applicable parochial sense) after all.

Didn’t he see? Didn’t cutting down the nets in 2013 — and, perhaps even more impressively, reaching back-to-back Final Fours and four consecutive Sweet 16s — show him that he already had what he needed in terms of talent? Luke Hancock was a total top-100 no-show as a high school prospect, yet he was the MOP at the 2013 Final Four. Didn’t that tell Pitino something?

“Pitino was cheating and in cahoots with Adidas even before Bowen.” What an idiot. How to put this delicately. Louisville’s recruiting the last five cycles hasn’t exactly been so outstanding as to invite suspicion. I mean, can’t you even cheat effectively?

Heck, Louisville only looks as good as it does here because Bowen’s commitment is included in the 2017 numbers. Take him out, and the Cardinals’ five-year total drops below ones posted by Texas and North Carolina. If Pitino really was in personal nefarious cahoots with Adidas all along and helping to shovel cash to recruits, all it got him was “me-too” status down there with the likes of Florida and Indiana and far, far below UK and the Blue Devils.

“Pitino never knew.” What an idiot. If Pitino never knew about the escorts and never knew about Adidas allegedly showering cash on Bowen, then he was a extraordinary basketball coach who suffered the misfortune of being sabotaged and, eventually, put out to pasture by a hapless and utterly incurious chief executive named Rick Pitino.

About the extraordinary coach part, consider this excerpt from a 2014 piece by C.L. Brown:

Jeff Van Gundy, who was on Pitino’s Providence College staff from 1986-88, considers the Friars’ run to the 1987 Final Four the gold standard of coaching. Like the Cardinals’ 2010 class, Van Gundy said forget All-Americans, the Friars barely had “all-league players,” but Pitino took those “low-major players and made them really good.”

Pitino was the first coach to take three different schools to the Final Four and became the first to win national championships at multiple schools when the Cardinals won it all in 2013.

Pitino’s reputation was always built more on his chops as a player-development wizard and sideline coach than on any pretenses to Calipari-level recruiting. A coach who’s that good and who then loses his job because the people he chose to hire then chose to run amok would not constitute a tragic spectacle per se. His job was to make players good at putting a ball through a hoop, and, while I happen to describe that activity for a living, I also recognize that this is not the stuff of Lear.

No, a hall of fame coach coinciding in the same person with a hands-off, eyes-off, ears-off and brain-off manager would be merely fascinating. Maybe that’s what happened with Rick Pitino. Maybe his name will henceforth be cited at coaching clinics and business schools alike. Perhaps, someday, the full story will be told.