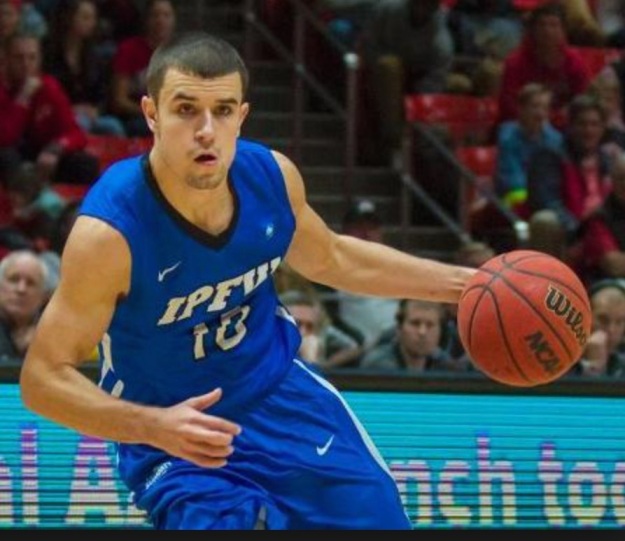 “Let’s dispel once and for all with this fiction that Buddy Hield is the only player who’s making about half his threes while attempting about eight of them a game. I’m Max Landis, and I approved this message. No, not that Max Landis.”

So far in 2015-16, attempts from inside the arc have comprised just 64.8 percent of all shots in Division I. True, 64.8 percent of anything is a fair share. Nevertheless, that figure does represent an all-time low. To quote a movie, at this rate twos will disappear entirely in another 27 years.

It is therefore fair to say that a three-point revolution is at hand. Being the helpful, proactive, and modest sort, I’ve prepared a brief précis to help you safely navigate this bold new era’s tumbrils and barricades. Enjoy.

There’s a reason it may seem like you’re not really seeing a revolution
Strictly speaking threes are at an all-time high across the breadth of D-I, but, as always when the subject is college basketball, this is somewhat misleading. No human being watches all of D-I, and the numbers that emerge from this vast unseen monolith are driven by a bulky majority of programs that even most professional college basketball writers never once glimpse during a given season. For example the most perimeter-oriented leagues in the nation are currently the SoCon, the Big South, and the MAAC. Conversely, the teams that more fans and writers do tend to watch are, rather ironically, the exceptions to the revolutionary rule.

The three-point attempt rate for all 351 programs in all games is 35.2 percent, but in major-conference play this season that rate has been “just” 34.1 percent. While this sounds like a small difference, if you’re a fan of, say, the ACC (33.0) or especially the Pac-12 (31.9), you’re seeing some of the least perimeter-oriented ball in all of D-I. Duke and Arizona State are doing their level best to bend those tendencies within their respective leagues, but the collective stylistic weight of 25 other teams is formidable.

This three-point revolution is returning us to precisely where we were after the last one
Before the 2008-09 season, the NCAA moved the three-point line back one foot to its current position. The season before the line was moved, the rate for three-point tries in major-conference play had reached a then all-time high of 34.0 percent.

In other words it’s taken eight years, but we’re finally back to where we were when Mario Chalmers was sinking that three over Derrick Rose. Is this a revolution or a restoration? That likely depends on how far back your memory extends.

Moving the line showed how dramatically the major conferences really differ from the rest of D-I when it comes to threes
When the line was moved back a foot before the 2008-09 season, the thinking was to make it more difficult to convert three-point attempts. That’s exactly what happened in D-I as a whole, as three-point accuracy decreased by 0.8 percent in a single season. That season marked the largest decline in three-point success in 15 years.

But in major-conference play, three-point accuracy actually increased slightly in 2009. Major-conference coaches that season seemed to respond to the new line by using their green light more judiciously and indeed successfully. When you see discussions of three-point shooting in 2016 and stats from all of D-I are used, remember as well to look into what’s happening with with the major conferences — particularly if you’re a fan of a major-conference team or you cover them.

Stephen Curry has changed attitudes more than he’s changed the numbers — but numbers follow attitudes
“Threes at an all-time high,” “Buddy Hield,” and “Curry Effect” are excellent news pegs, which is why I’ve used all of the above this season. Then again “biggest jump in three-point tries in 20 years” is an outstanding news peg in its own right. And, as it happens, it applied to last season.

There was a fair amount of Curry mania at large in our land one year ago, of course, but to my recollection no one at the time thought to attribute the biggest jump in three-point tries in 20 years to the example being set by Golden State’s star. (If I remember correctly, back then we were busy grousing about how low-scoring the games were.) Perhaps this 1.8-season-long-and-counting upsurge in three-point attempts at the college level is simply larger than any single heroic figure at the next level.

That being said, I do think this particular heroic figure has had an enormous discursive impact. The last time D-I devoted somewhere in the neighborhood of 34 or 35 percent of its shots to threes, in 2007-08, it was said that this trend needed to be checked and, more specifically, that the three-point shot had become too “easy.” Moving the line back a foot was intended to address both concerns.

Though you can certainly encounter observers in 2016 who want to move the college line back once again, in my estimation the whole attitude toward threes has changed dramatically in eight short years. There’s less concern about threes taking over the game, nor is it as widely thought that making a shot from beyond the arc is too easy. Naturally there’s no way of knowing what form these same attitudes would take in an imaginary no-Curry world, but I have to believe he’s had an impact.

The three-point shot had to serve a long apprenticeship in college basketball before it finally shed its reputation for being a gimmick, but even as late as 2008 it was still regarded as somewhat extraneous by a significant minority of coaches. Some coaches still feel that way, of course, and if you can win with that belief by all means do so. Nevertheless in 2016, thanks in no small measure to Curry, there is a growing sense among a broad swath of the coaching fraternity that there’s something there when it comes to threes.

The most frequent thing that will happen is of course a miss, and the question facing any coach can be boiled down more or less as follows. Dunks and layups notwithstanding, if your player is going to try a jump shot that will likely be a miss, would you prefer that the attempt has a chance at netting you three points instead of just two?