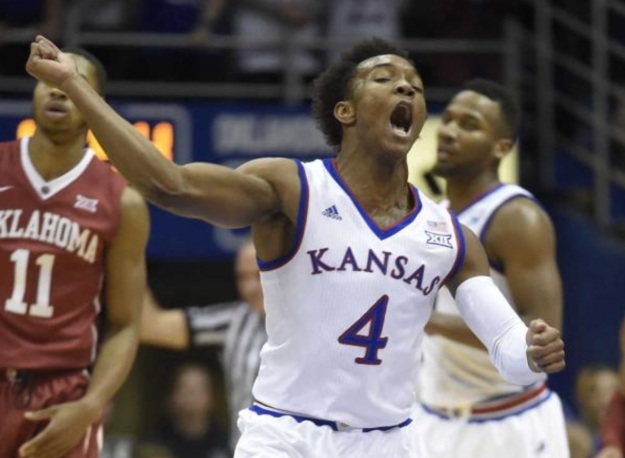 In the offseason the NCAA introduced a whole host of rule changes and/or “no, this time we really mean it” reemphases. Most prominent among the new measures was the 30-second shot clock, and coming into the season it was natural to think of the clock as purely a tempo-reform measure while pretty much everything else was either efficiency- or justice-related.

As always with such offseason discussions, the potential impact of the new rules and new clock were considered at length because it was hot outside and we had no games to talk about. Then, once the season started, we properly moved on to more pressing concerns such as who’s going to win the national title. As chance would have it I’m still interested in who’s going to win the national championship, but today I want to pause briefly to consider how the major conferences are faring in terms of tempo, efficiency, and scoring.

I realize that on January 6 it may seem rather early to look at the shot clock’s effect on conference play. Well, it is early. Still, 69 major-conference games have already been played, and that’s 10.2 percent of the eventual total right there. Think of it as the same number of games that, say, the Big 12 or Big East will have played in-conference by late February.

In previous considerations of what does or does not ail college hoops, I’ve offered a distinction between colleagues who tend to be more concerned than I am with point totals on the one hand and yours truly on the other. (This small-c catholic hoops fan just wants a good game. Sometimes that means offense; sometimes it’s D.) To each their own, surely, but the good news for my scoring essentialist friends is that offensive production this season has perked up very nicely. 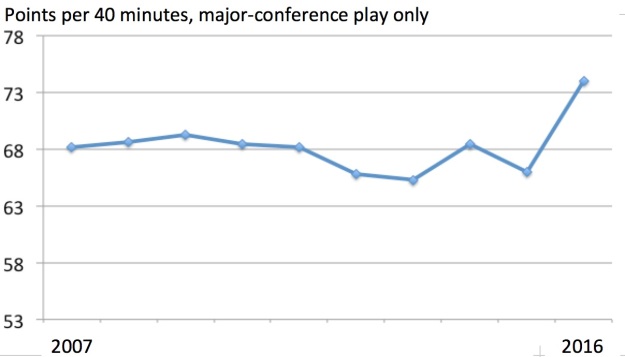 Granted, this graph is representing “2016” as coequal in heft with all previous years when in fact this season is still very much a work in progress. The point here is not that the current rate of scoring will most certainly continue precisely at its present level. No one without a time machine can declare either way on that question. It is true, however, that what we’ve seen so far represents a measurable jump over what transpired in past years. (For the record, apples-to-apples comparisons of this season to the same point in time a year ago also suggest a significant scoring increase is afoot.)

An average offense is now scoring 73.5 points per 40 minutes in major-conference play. This is an 11 percent increase over last season, and anything in this neighborhood would be easily the highest such number I’ve tracked in the decade or so that I’ve been parsing such figures.

From my chair there’s even better news behind the good news. The increase in scoring has materialized this season without much of anything in the way of a corresponding increase in free throw rates. True, the free throw rate (FTA/FGA) has ticked up a hair in major-conference play since last season, but the increase has been so small as to be negligible — especially compared to the spike we saw just two years ago in 2013-14. If this trend were to continue, “more scoring without too many more free throws” would constitute a best-case scenario for those of us who as a general rule find free throws rather boring. (Unless of course it’s Chinanu Onuaku who’s at the line.)

Instead of being simply the product of more trips to the line, this season’s scoring increase has been largely the result of a marked acceleration in tempo. An average 40-minute major-conference game this season has contained 69.5 possessions. That’s eight percent faster than last season’s number (64.1), but it’s also true that 2015 was the slowest major-conference season I’ve ever tracked. What we’re seeing this season, then, is less of a brave new world than merely a return to tempo normalcy. This is basically the same pace we saw from major-conference teams as recently as 2009, and I, for one, think it’s good to be back. I’m pro-normalcy.

When we look back on the regular season in March, we may have occasion to say that the NCAA did for pace in 2016 roughly what it did for offensive efficiency in 2014. Boosting the major-conference free throw rate by 14 percent two years ago improved offensive efficiency by four percent. Similarly, shaving 14 percent off the time allowed for a team to attempt a shot this season has sped up major-conference games (so far) by eight percent.

The fear in some quarters before the season started was that any acceleration achieved by a new clock could be wiped out by a drop in efficiency on offense. It’s early, of course, but so far offenses have actually been slightly (2.4 percent) more effective in per-possession terms during major-conference play.

Watching the 30-second clock take its place as part of the new college-hoops normal makes me conscious of the sheer volume of water that’s gone under this particular bridge. I can’t help but think of how the very idea of shortening the shot clock to 30 was considered an NBA-flavored non-starter when my colleague Kevin Pelton floated it just five short years ago: “A 30-second clock would produce a better NCAA game.” The season’s young, but Kevin can be forgiven if he’s thinking in Monmouth-bench terms of the appropriate celebratory told-you-so choreography.