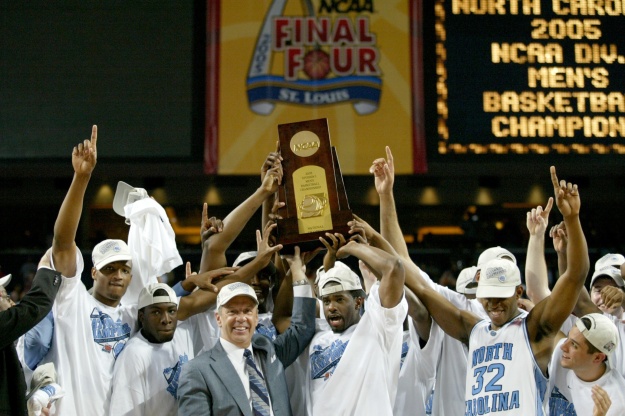 It appears some of these guys weren’t subjected to particularly rigorous academic challenges. What’s far more surprising, however, is that neither were some of their fellow students in the stands. (Grantland)

After reading Kenneth Wainstein’s report on the University of North Carolina’s academic misdeeds between 1993 and 2011, it occurred to me that if I were a graduate of UNC the really galling thing would be that my highly prestigious alma mater was so badly outperformed in this one respect by Auburn.

Eight years ago more or less the exact same transgression that has now been documented so thoroughly in Chapel Hill also came to light at Auburn. In both cases a faculty member was found to be offering an inordinately high number of “independent studies classes.” In both cases the grades that athletes received in their independent studies were far higher than their overall grade point averages. END_OF_DOCUMENT_TOKEN_TO_BE_REPLACED

Sugar beet farmers, 1948. The parallel between them and Jahlil Okafor is obvious. To the legal system.

The fact that the question raised by Ed O’Bannon landed on the docket of U.S. District Judge Claudia Wilken is solely and ineluctably the NCAA’s fault. It should never have come to this. The NCAA never offered a common-sense justification for not compensating O’Bannon for the use of his name, image, and likeness. Then again logic, fairness, and common practice all unite in saying there can be no such justification, so don’t blame the NCAA’s lawyers for the weakness of their argument. Blame the NCAA for taking this to court in the first place.

With any organization that operated without the debilitating procedural inertia of several hundred otherwise distracted voting members (otherwise known as Division I), this matter would have been settled outside the courtroom. Such a resolution would have had two cardinal virtues: 1) It would have been the collaborative product of the parties involved; and 2) It would, one assumes, have been tailored to to the very different needs and characteristics of the two revenue sports, football and basketball.

Now we have a resolution to the dispute that sides with O’Bannon, but does not possess either of these two virtues. In other words, we have a court decision, and more’s the pity.  END_OF_DOCUMENT_TOKEN_TO_BE_REPLACED

Today the NCAA board of directors is expected to allow the ACC, Big 12, Big Ten, Pac-12 and SEC to set their own rules and pass resolutions without the approval of the rest of Division I. It is widely anticipated that this so-called “big five” will move toward offering full cost-of-attendance scholarships to their athletes, thereby giving recruits an added incentive to play at one of these member institutions as opposed to any of the 280-odd schools outside the charmed circle.

This will lead to a good deal of “rich get richer” talk, and, to be sure, I don’t suppose if I were a fan of a non-big-five hoops powerhouse like Connecticut or Memphis I’d welcome this development with unalloyed euphoria. But is this really going to have a huge impact on the actual college basketball results we see on the court?  END_OF_DOCUMENT_TOKEN_TO_BE_REPLACED 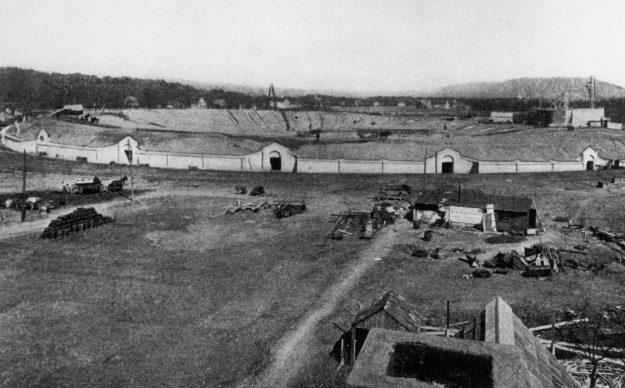 Construction of the Yale Bowl, 1913. And here our troubles began.

Last week there was an NLRB ruling that you may have heard about concerning the Northwestern football team, and there is also a collegiate sporting event this weekend that is fairly well publicized in its own right. This has meant a deluge of polemic on the subject of what is to be done with college sports. I believe the deluge is a positive development, and, even if it weren’t, I’m a good host. So:

Welcome, reformers. We’ve been hoping you’d arrive. I too have my torch and pitchfork, and I trust we can all agree there’s more than one tweak to be made when it comes to revenue sports.

I’m proud to announce I’ve discovered an “ideal of the amateur coach.” Compared to the thin and meager history behind that wobbly and dubious model of the amateur athlete, I can footnote my exciting new ideal something fierce, citing precedents dating back to Socrates. Henceforth coaches will receive no outside compensation, no endorsement deals, no fees from speaking engagements, nothing. Schools can pay for a coach’s room and board and a few other incidental expenses, but that’s it. After all, college sports are not about the coaches. How many people do you think would come out to see John Calipari coach a bunch of D-League players?

END_OF_DOCUMENT_TOKEN_TO_BE_REPLACED 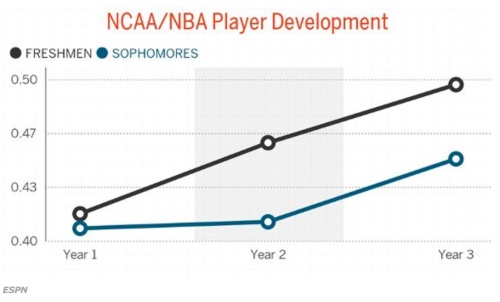 Proper response of Division I head coaches and the NCAA to this graphic: Uh-oh.

The evergreen topic of the NBA’s age limit has popped up again in the news, as it is wont to do every couple of years. Whenever this discussion recurs, it’s informed and to a certain extent framed by two implicit assumptions:

1. Player development is a gift waiting to be bestowed by wise college coaches if only blue-chip Division I programs can get the nation’s best young prospects in-house for a season or, even better, two.

2. College ball and the NBA together comprise a closed-loop pipeline that elite players will always have to navigate, international prospects and the occasional Brandon Jennings notwithstanding.  END_OF_DOCUMENT_TOKEN_TO_BE_REPLACED

Speaking at the IMG Intercollegiate Athletics Forum in New York yesterday, NCAA president Mark Emmert answered a question about the criticism that’s been directed his way by my ESPN colleague Jay Bilas. “I don’t like the ad hominem attacks,” Emmert said, to which Jay immediately responded: “They’re not attacks. The criticism is fair, and right on.”

As Jay himself is wont to say, reasonable people can differ on the precise point at which substantive criticism becomes an exercise in ad hominem polemic. For Emmert, that point was apparently reached earlier this year when Jay called the NCAA’s head man “an absentee president.” Personally I think that’s self-evidently an assessment of performance rather than a prejudicial slander — pallid grounds for a duel, if you ask me.  END_OF_DOCUMENT_TOKEN_TO_BE_REPLACED 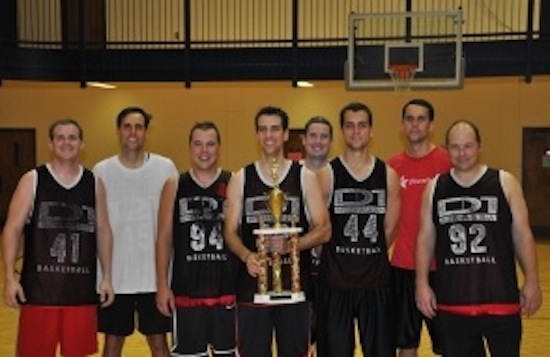 Emmert to Colgate: “Not on my watch!” Bravo, NCAA, for vigilantly protecting opponents of mighty Colgate (KenPom No. 306) from the unfair advantage provided to Nathan Harries after he played three Georgia Sports Leagues games against fearsome opponents like these guys.

By now you’ve heard the outcry over the NCAA’s initial — though perhaps not final — ruling that Colgate freshman Nathan Harries is ineligible to play basketball this season. After graduating from high school, Harries served a two-year mission as a Mormon before playing in three Georgia Sports Leagues games this past summer at the Dunwoody Baptist Church outside Atlanta.

I’ll get to all that in a second, but first a note to aspiring writers. This is a pretty fair lede: END_OF_DOCUMENT_TOKEN_TO_BE_REPLACED