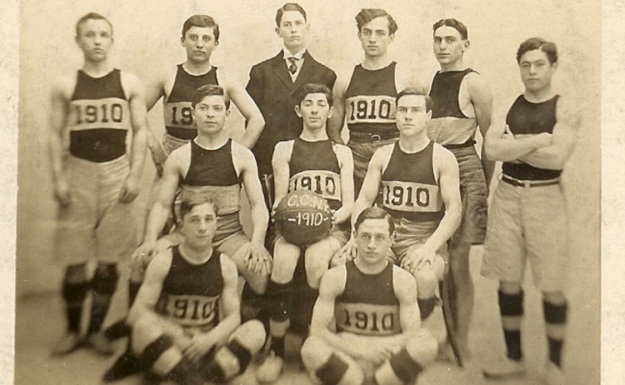 Disqualifying players for committing too many fouls is a really old practice, but not quite as old as basketball itself.

The idea of removing players from the game after they commit their fourth or fifth or sixth personal foul has been in place for over 100 years. Indeed, disqualification of individual players is today, rather incredibly, the primary and virtually unchallenged method for penalizing fouls all over the world and at all levels of basketball. Yet you and I will likely never learn the name of the person or persons that first came up with the idea.

This is curious. After all, the shot clock had Danny Biasone and Leo Farris, and even the rather more murky-at-the-creation three-point line has multiple named aspirants for Founder status. But who will come forward and claim parenthood for, by far, the oldest feature of them all, the foul-out?

We do know the name in question wasn’t Naismith. In the good doctor’s 13 original rules, a player picking up their second foul was removed from the game, but only until the next basket was scored. That was actually more punitive than it sounds (scoring was infrequent at the dawn of “basket ball”), but the essential point is a player could still come back into the game after he or she had served their penalty.

That idea turned out to be surprisingly short-lived. By 1910, at the latest, officials in some college games were disqualifying players for committing too many fouls. The foul limit has been tweaked over the ensuing 100-plus years, and, when the upstart NBA rolled out in 1946, player disqualifications were part of that league’s original equipment.

The foul-out has been with us ever since.

Imagine for a moment that the penalty for a player exceeding the personal foul limit were the activation of trap doors at random and undisclosed locations on the offensive end of the court for that player’s team. The entrances to and interiors of the resulting oubliettes would be padded, of course, to insure that no one is actually injured as they’re suddenly whooshed beneath the playing surface.

Doubtless we would then become embroiled in a rather circular, tedious, and decades-long negotiation over the optimal number of trap doors to have on the floor. The NBA would have six trap doors, the college game would have five, and FIBA would do something needlessly odd with the shape of the openings themselves.

Likely the justification for such a state of affairs would be phrased in roughly the same manner that the foul-out is customarily defended. “Don’t want to have trap doors swinging open at random and undisclosed locations on your side of the court? Fine, stop fouling so much.”

We recognize instantly that trap doors are a bad idea, and I suspect we’d do the same with the foul-out if it were promulgated for the first time today. Most crucially, the problem with either trap doors or disqualifications isn’t that the penalty in question is too harsh or too lenient. Actually, both remedies can be either too harsh or too lenient, depending entirely upon how they’re implemented.

No, the problem is that putting trap doors in the floor or disqualifying players is simply extraneous to the question that a game exists to answer in the first place. We want to know which team is better. Having players disappear, either by gravity or by benching, changes the question itself.

Can we put a sufficient penalty on fouls through some means other than by disqualifying players?

Of course. If individual players were allowed unlimited fouls but each made free throw were worth, for example, eight points, players would be extraordinarily motivated to avoid fouling despite the absence of a traditional foul-out rule.

A better question might be how player disqualifications came to be perceived as the alpha and omega of foul-specific punitiveness in the first place. Just because you’re removing players from the game doesn’t mean you can’t be even harsher on fouling should you be so inclined. You can set up any penalty you wish, and, naturally, it can be far tougher on fouls than player disqualifications.

When a player fouls out, there will, supposedly, be a drop-off in performance between the individual taking a seat and the substitute taking that player’s place. All our new no-foul-out penalty has to do — again, if we wish — is to inflict a bigger hit on the team’s performance than a substitution would. That’s an empirical matter, and we can be as harsh or as lenient relative to that metric as we want.

Personally, I want to see players stay in the game not because I don’t care about penalizing fouls but because seeing players in the game is why I watch. In other sports, such a non sequitur requires neither expression nor defense.

In this sport, I suspect a quorum of reasonable observers can agree on what we want from a game.

Note the sovereign and sometimes overlooked importance of No. 2 on the list. Occasionally schemes are floated to keep players in the game either by increasing the foul limit or by awarding more free throws to the opponent once a player crosses said limit. The Big East tried the former scheme between 1990 and 1992, for example, and, well, let’s just say it didn’t go well.

Keeping players in the game is the ideal, but it’s not the only ideal. Maintaining the tenor of the sport such that there are, give or take, three or more shots from the field for every free throw attempt is coequal here. Whatever our new scheme is, it can’t just keep players in the game at the cost of turning games into free throw contests.

Speaking of our new scheme, well, take it away, NIT. Let experimentation reign. Perhaps the most promising areas to start will prove to be team fouls and free throw values.

We already put teams in the bonus, for example, regardless of which individual players commit the fouls. Maybe we can revisit the scale of penalties on team fouls such that players are sufficiently wary of being whistled for a violation even if, short of ejection, they can’t be removed from the floor.

Part of the review of available penalties may include increasing the value of free throws once a certain team foul limit is crossed. If we wish to accomplish items Nos. 1 and 2 on our list and treat both as true equals, one remedy could be the introduction of the two-point free throw.

Lastly, there is of course that hardiest of perennials in these discussions, free throws plus possession of the ball. Let that be part of the experiment as well.

I first broached the possibility of ending the foul-out in 2010, little knowing that the Big East conference had beaten me to that purely speculative punch by a full 20 years. Possibly another flaw in my unknowingly late eureka was devoting all of 65 words to the idea. So, no, my paragraph did not seize the imagination of the basketball world, go figure, and here we are.

The good news, though, is that today I’m at least in the happy position of adding my heartiest amen to the work of really smart peers who subsequently put the case far better than I did: Eamonn Brennan (2012), Kevin Pelton (2014), Dick Jerardi (2017), and Ben Falk (2018). Read deeply and ponder.

Changing what we’ve been doing for over a century is not to be undertaken lightly, granted. Still, one thing to guard against in any such discussion is underestimating inertia and overestimating the distilled and time-sanctioned sagacity of longstanding custom in sports.

High school basketball in the United States, after all, is as old as the sport itself, older than even the earliest pre-NBA forms of pro ball. Yet tonight and every night there will be hundreds of high school games played that still won’t use a shot clock.

The sport is the product not only of Naismith’s imagination but also of subsequent experiments that were fiercely resisted in their time while also being far more fundamental and thoroughgoing than any adjustment to foul penalties. The three-point line and the shot clock were successful experiments. Maybe ending the foul-out would be too. Let experience find that answer.