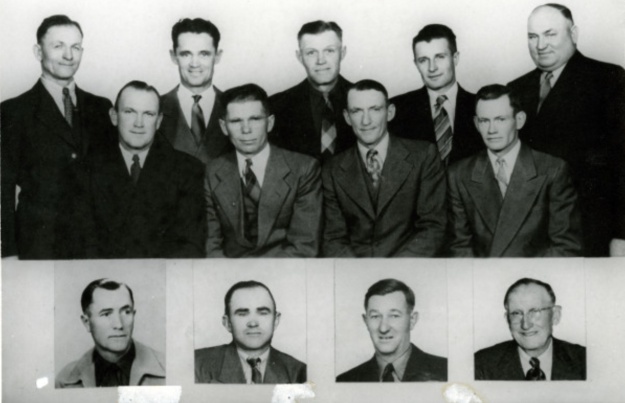 Sugar beet farmers, 1948. The parallel between them and Jahlil Okafor is obvious. To the legal system.

The fact that the question raised by Ed O’Bannon landed on the docket of U.S. District Judge Claudia Wilken is solely and ineluctably the NCAA’s fault. It should never have come to this. The NCAA never offered a common-sense justification for not compensating O’Bannon for the use of his name, image, and likeness. Then again logic, fairness, and common practice all unite in saying there can be no such justification, so don’t blame the NCAA’s lawyers for the weakness of their argument. Blame the NCAA for taking this to court in the first place.

With any organization that operated without the debilitating procedural inertia of several hundred otherwise distracted voting members (otherwise known as Division I), this matter would have been settled outside the courtroom. Such a resolution would have had two cardinal virtues: 1) It would have been the collaborative product of the parties involved; and 2) It would, one assumes, have been tailored to to the very different needs and characteristics of the two revenue sports, football and basketball.

Now we have a resolution to the dispute that sides with O’Bannon, but does not possess either of these two virtues. In other words, we have a court decision, and more’s the pity.

On Friday Judge Wilken ruled that O’Bannon had been so right all along, he was even right in ways that neither he nor his lawyers had yet thought to explore. O’Bannon’s attorneys alleged the NCAA was in violation of antitrust laws because it forms a monopoly, a claim which elicited a hearty “Yes, and….” from Wilken. To her way of thinking the NCAA is actually more of a monopsony.

Where a monopoly’s represented by a lone seller or an agreement among a small number of sellers to fix prices, a monopsony describes a price-fixing covenant among buyers. In Wilken’s view, the NCAA’s member institutions have agreed to fix the price they pay in exchange for the services of talented football and basketball players.

Sports franchises competing against one another within a common league do this quite often, of course, and by now the NCAA really should have managed to secure that antitrust exemption from Congress. Acquiring that exemption was first suggested to then executive director Walter Byers more than 30 years ago. Byers never got around to it, nor did any of his successors.

When you don’t have an antitrust exemption, you have to argue you’re not guilty of antitrust. The NCAA tried to do just that, insisting, in effect, that no consumers (defined as television viewers, fans in attendance, and purchasers of merchandise) were harmed in the making of this football or basketball game. Wilken then side-stepped this argument more or less entirely (which by the way would have saved a great swelling host of confused tweets in June from reporters during the trial) by saying it doesn’t matter whether your price-fixing agreement raises the prices ultimately paid by consumers. It doesn’t matter because the Supreme Court, in a 1948 case involving monopsonistic practices among California sugar refiners, has said it doesn’t matter.

As a matter of case law, this analysis was dispositive for Wilken. It is not clear, however, that mere adherence to Sherman Antitrust case law will be terribly helpful in fashioning a post-O’Bannon college sports system that is respectful of its setting within higher education, free — at long last — of all muddled cant about amateurism, and centered on and fair to its athletes. I can be as indignant about antitrust violations as the next consumer. I rather imagine, however, that the moral force of the Supreme Court’s decision in support of California sugar beet farmers in 1948 would have been obviated somewhat if sugar refiners in Florida were operating in precisely the same manner but doing so under an antitrust exemption.

Wilken’s ruling has some brilliant passages — see especially pages 80 and 81 on how “amateurism” is defined in flatly contradictory ways by the NCAA depending on the sport you play — but it feels churlishly defensive and hermetically sealed on the central question. Do the harms inflicted by Division I schools’ monoposonistic ways really rise to the level of state action? Do they rise to that level when we know that precisely the same practices are carried out in the vastly larger markets constituted by professional sports? The words “antitrust exemption” appear nowhere in the ruling’s 99 pages.

We can be happy for O’Bannon (the person) while noting that O’Bannon (the ruling) encourages the laziest and most litigious guys and gals in the “Let’s reform college sports” room. Saying something constitutes an antitrust violation has become the de facto synonym for “I am unhappy with this” in this room. When all you have in your reform toolkit is an antitrust hammer, every blunder made by the NCAA — and there are no shortage of those — looks an awful lot like an antitrust nail.

Postscript: We are all Mark Emmert. How did the NCAA get itself into this mess in the first place? The common explanation is greed.

Maybe the common explanation is correct. When technology furnishes us sufficient means to settle the question definitively, we may indeed find out that we’ve been right all along. Perhaps the problem really has been the greed of the NCAA, and after we’ve hooked up Mark Emmert and his gang of thugs and thugettes to the properly engineered trait sensors we will have conclusive proof that they rate out very highly on greed. (Walter Byers, as ever, favors a formulation that is at once older and more judgmental, so his preferred term here is the more biblical “gluttony.”)

But if instead we discover that in fact the greediest people in the United States have not self-selected themselves into positions at the NCAA, it may be because all of us — fans and sportswriters; lawyers and alumni; reformers and traditionalists — would react in more or less the same fashion when approached at our place of business first thing tomorrow morning by a person saying this:

Hi. I’m here to alter the fundamentals of the historically and extraordinarily successful business model that pays your salary. Altering those fundamentals is the right thing to do, but you should know that henceforth you will face increased legal exposure and a host of uncertainties and labor-increasing tasks as your employer navigates this unprecedented transition.

Let he or she who is without an antitrust exemption cast the first stone.